To share your memory on the wall of Fay Ables, sign in using one of the following options:

Funeral Services are 11:00AM Saturday, March 20, 2021 at Sallis Baptist Church with burial to follow at Dickerson Cemetery.

Funeral Services are 11:00AM Saturday, March 20, 2021 at Sallis Baptist Church with burial to follow at Dickerson Cemetery.

Visitation is 10:00AM Saturday at Sallis Baptist Church.

Fay resided in West Memphis for twenty-two years before moving to Phenix City, AL for the last 32 years where she became a member at Smith Station Baptist Church and worked in retail advertising for newspapers.

To send flowers to the family or plant a tree in memory of Fay Ables, please visit our Heartfelt Sympathies Store.

We encourage you to share your most beloved memories of Fay here, so that the family and other loved ones can always see it. You can upload cherished photographs, or share your favorite stories, and can even comment on those shared by others.

Encompass Home Health, With Love, Nick and Brittany Scott, and other have sent flowers to the family of Fay Ables.
Show you care by sending flowers

Posted Mar 19, 2021 at 02:18pm
It was a blessing to know and care for Mrs Ables! Our prayers and love are with the family during this time.

Flowers were purchased for the family of Fay Ables. Send Flowers

With Love, Nick and Brittany Scott

Posted Mar 19, 2021 at 12:49pm
Sending our thoughts &prayers. Wishing you peace & comfort, courage to face the days ahead& memories that will live on forever in your hearts.

With Love, Nick and Brittany Scott purchased flowers and planted a memorial tree for the family of Fay Ables. Send Flowers

Posted Mar 19, 2021 at 09:20am
This just breaks my heart. 😢 She was such an amazing woman! She had been through so much over the last few years with her health but she still stayed strong in her faith. I have known her and her sweetheart, Mr. Ables, for 25 years. They always treated me and my family like we were part of theirs. I still remember him being outside of the church near the nursery at SSBC greeting. I would get my big hug from him and then find her for more love. I remember seeing her at Dollar Tree several months ago and she asked me why I hadn't been to visit her. I had moved to another church in the area and didn't see them regularly due to it. Another reason was just life...you get caught up with the everyday routine and forget the importance of a simple phone call, visit or hug. My heart breaks knowing that I didn't take that time but I know that they both knew the love that we had for them. I have peace for them in knowing that this dear precious woman of God is now walking the streets of gold. Wow! She will surely be missed. Much love to the family at this time.
Comment Share
Share via:
CS

Carol Spagnoletto purchased the Blooming Garden Basket and planted a memorial tree for the family of Fay Ables. Send Flowers 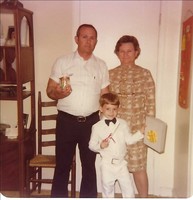 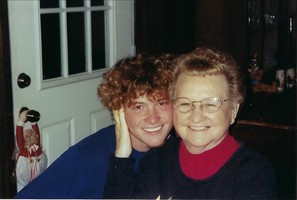