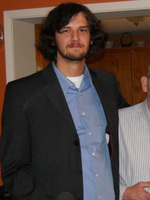 He was preceded in death by his grandparents Mary Louis and Britt McBride and Calvin Overstreet.

He was a self-employed construction worker.