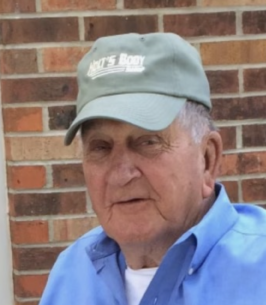 Dock Holt, 87, passed away Saturday, March 12, 2022 in Greenville.
Funeral services are 2:00 pm Monday, March 14, 2022 Graveside at
Parkway Cemetery in Kosciusko. Visitation will be at the Graveside beginning at 1:30 pm.

Dock worked for Blaine Construction for 27 years after that
he sold automobiles for 17 years and then he sold equipment. He loved working
outdoors, whether it was running equipment, tending to his cows or bailing hay.
He was working up until his death doing what he loved to do.

This June, Dock and Kay would have been married 61 years.

Dock was preceded in death by his Grandson Dallas Holt and his
parents Harlon and Mary Frances Turner Holt, brothers Robert Earl Holt and
Charles (Buddy) Holt and his sister Mildred Sprayberry.

For online condolences visit culpepperfuneralhome.com
In lieu of flowers memorials to MS Juvenile Diabetes Foundation
For those attending the services, casual attire is requested.